There’s a whole lot of mayhem continuing to plague the Tropical Atlantic and some portions of the land surrounding it this afternoon.

We’ve had two more storms, Wilfred and Alpha, named this morning which brings us into the Greek Alphabet for the first time since 2005 and the second time since tropical storm naming began back in 1950. Wilfred is located southeast of Teddy and poses no threat to any landmass. Alpha is barely visible on this image near Portugal where heavy rain and strong winds are ongoing. Meanwhile in the Gulf of Mexico, TD 22 is spinning between Texas and the Yucatan Peninsula. TD 22 does pose a serious threat to Texas in the form of heavy rain, but it will not be the subject of this post. Instead, we’ll focus on Teddy here.

Teddy is one of those hurricanes you see on the front cover of meteorology textbooks. It has a circular and nearly symmetrical eye, a ring of extremely intense eyewall thunderstorms, and expansive upper-level outflow in all directions away from the center. As of the 11 AM EDT update from the NHC, Teddy had maximum sustained winds of 130 mph making it a Category Four storm.

Microwave imagery from polar-orbiting satellites lets us peer under the upper-level clouds into the storm’s structure.

The storm’s eyewall is clearly visible using this tool as the ring of red/green surrounding the eye which is visible in bright purple. The northeastern eyewall is clearly much more intense than the southwestern eyewall. That’s due to a bit of southwesterly wind shear the storm is dealing with on the southeastern side of a weak upper-level low. Teddy’s outflow is working to blast a hole in that upper-level low so the storm can continue moving northwest with minimal disruption.

The only thing slowing Teddy down prior to its arrival in Bermuda will be interaction with a pool of cold water left by Paulette. This should be enough to knock the storm’s maximum winds down a little bit, but all most of that angular momentum will stick around in the form of an expanding wind field and the balance will be transferred to the ocean in the form of massive waves.

Thankfully, most model guidance has the storm sliding just east of Bermuda as it makes its closest approach on Sunday night. That will put the island on the “weaker” side of the storm, and perhaps just outside the eye. However, because the storm’s windfield is so massive, strong winds are basically a lock for the island at this point. It’s just a matter of figuring out whether that’s 50 mph, 75 mph, or 100+ mph.

After Bermuda, Teddy is still expected to make a turn to the north or north-northwest as an upper-level low cuts off to the west/northwest of the storm. The exact details of this interaction between the hurricane and the trough are still yet to be determined. That said, guidance has shifted east a bit in the last day or so. That means a direct hit for eastern New England now looks unlikely. Nova Scotia is much more likely to get the brunt of Teddy as it moves onshore as a hurricane rapidly undergoing extratropical transition.

This is the forecast shown by the majority of EPS ensemble members, though it should be noted that outlier solutions exist both to the west (farther into the Gulf of Maine) and to the east (closer to Sable Island).

This is one model depiction of what the storm could look like by Tuesday morning. The shading on the map depicts winds at 10m above the ground. If you don’t have your ruler handy, by this point in the cyclone’s evolution, the storm could have hurricane-force winds extending well over 100 miles from the storm center. So even if the hurricane’s maximum winds weaken dramatically before landfall (that’s expected to happen due to the cool waters in this area), strong winds will have no problem making it onshore.

With this in mind, Nova Scotia needs to be ready for serious impacts from Teddy including heavy rain, strong winds, and storm surge. 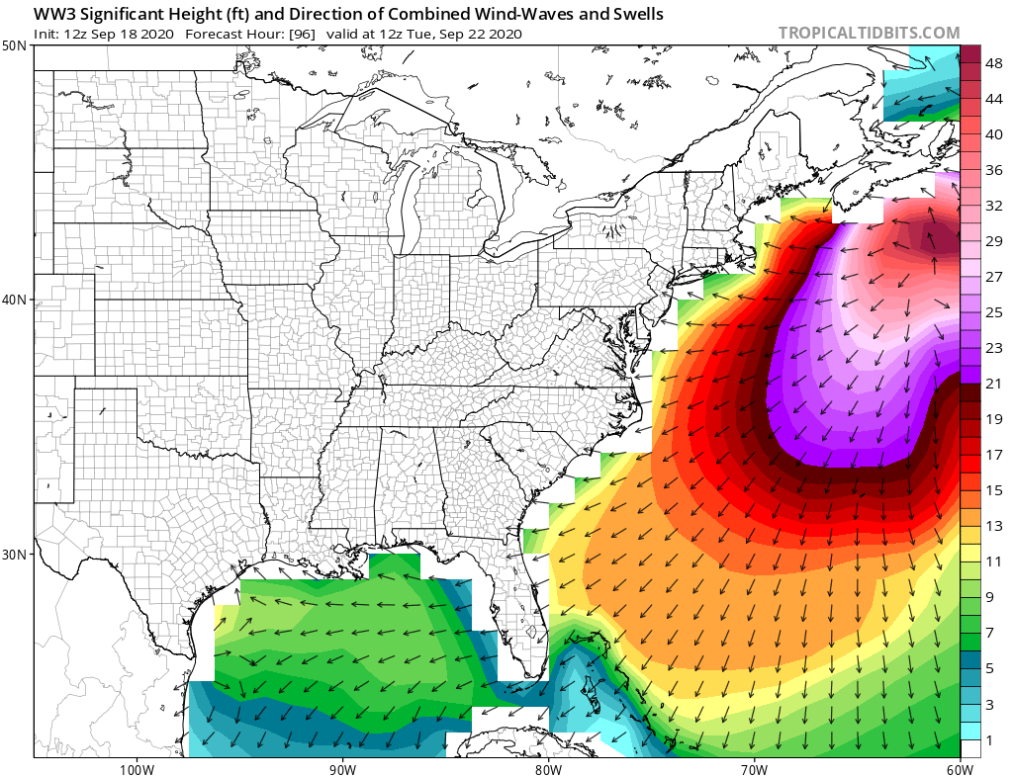 Significant wave height forecasts for Tuesday morning are approaching 50 feet near Teddy’s center off Nova Scotia while waves over 10 feet roll onto the East Coast from Maine to Florida and the Bahamas. Near-shore breaking waves will vary in height by exact location, but this shows that the threat for huge waves and all the dangers they pose (beach erosion, rip currents, washing people off the rocks, etc.) is quite high.

I’m a third-year atmospheric science student at Cornell University who has been blogging about the weather since 2011. While I’m not officially a meteorologist, I have accumulated a bit of experience forecasting both local weather (in western Maine and New Hampshire) as well as national/international weather during my time writing for weather.us and weathermodels.com. I also have experience programming in Python, teaching concepts in weather forecasting, and communicating forecast information to general audiences. View more posts

2 thoughts on “Major Hurricane Teddy Churns Through the Atlantic, Likely to Bring Direct Impacts to Both Bermuda and Eastern Canada”