Yesterday, we talked a lot about how Sally’s intensity forecast was quite uncertain but that the storm was likely to intensify into a hurricane if it was able to wrap deep convection around its low-level center. Unfortunately, that has been happening over the past twelve hours or so, though in fits and starts.

Last night’s convective burst waned a little bit as it ran into shear and dry air to the west of the storm’s circulation, but another burst has taken its place this morning and is once again attempting to wrap around the NW side of the storm. Whether or not it will succeed, only time will tell.

In the meantime, there is a bit of a shift in track guidance that’s worth talking about.

Yesterday, most guidance took Sally into SE LA before moving NW very near New Orleans then into SW MS or NE LA. Newer model runs are now suggesting the system may turn towards the north before reaching SE LA and instead make landfall in S MS. The HWRF does a particularly good job highlighting this trend, though it would work with any model of your choosing.

Why is this happening? Guidance is making some subtle adjustments to the steering pattern and is also expecting Sally to strengthen a bit faster today.

Remember that the stronger the storm gets, the more it will “feel” the southerly winds aloft that want to push the storm north. Because the storm appears to be strengthening this morning, I have confidence that this eastward trend in guidance is more signal than model noise.

What does that mean for impacts? 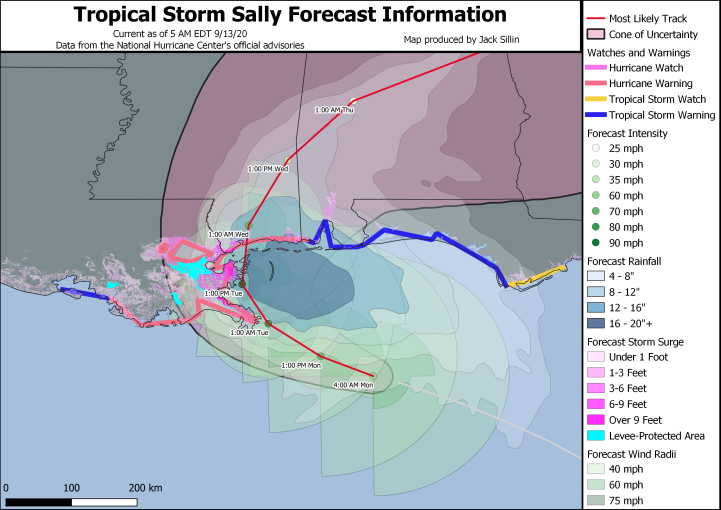 Here’s a look at the latest overview map from the NHC. Note the eastward shift in the forecast track from near or just west of New Orleans to near Biloxi Mississippi. The good news is for folks in New Orleans who are now very unlikely to see the worst of Sally’s rain, wind, or surge. Gusts to 40-50 mph will still cause power outage issues, and surge off Lake Pontchartrain (4-6+ feet) will still cause flooding. But given the potential Sally had to push hurricane or major hurricane-force winds through downtown NOLA, this shift in track is very welcome news.

When it comes to shifting tracks for landfalling hurricanes, good news for one area is bad news for another. The bad news is for southern MS, southern AL, and far western FL which will now be closer to the core of Sally as it moves onshore. Rainfall totals here will soar past 20″ as the system slowly crawls onshore. Meanwhile, surge will push into the various bays and inlets and could produce inundation of up to six feet as far west as the AL/FL border. Residents in these areas should be prepared to evacuate today if told to do so by local officials. Remember that storm surge risk is highly localized and depends on very small shifts in track/intensity. The values blanket outlined for large portions of the coastline may not be representative of how much water you see in your backyard.

While the water-related threats from Sally are far more serious than the storm’s winds, portions of the SE LA and S MS coastlines will see hurricane-force winds as the core moves onshore tomorrow. Tropical storm-force winds currently extend up to 125 miles from the storm’s center and will be capable of causing power outages even in areas that do not experience the storm’s core.

Here are a few more maps that show just the surge/rain/wind forecasts individually and are thus a bit easier to read.

Note that the highest surge, heaviest rain, and strongest winds are all focused near and just east of the center’s expected track. If the storm continues to strengthen today and ends up tracking a bit farther east, the worst of the storm would slide from near Biloxi MS closer to Mobile AL. Folks in this area should be preparing as though this were expected to happen. It’s also important to note that even on the storm’s current heading, one to two FEET of rain is expected for much of the MS/AL/W FL panhandles. Even if you don’t get Sally’s worst surge or winds, the rain is going to cause some serious flooding issues.

As the storm moves north on Wednesday, it will rapidly weaken though heavy rains will continue to push inland over MS/AL. The storm should dissipate by Thursday as it moves closer to Georgia.

I’ll have many more updates on Sally on twitter throughout the day. I also plan to do another post later this morning exploring some of the other tropical systems in the Atlantic basin.

Hello everyone! Mild weather will continue to impact the region today as high pressure slides offshore and southwesterly flow once again takes over our area. Any glimpses of sun this morning will be short-lived as clouds stream in from the west ahead of our next storm system. Despite the relative lack of sunshine, temps will […]

Hello everyone! Today will feature the passage of a fast-moving storm system as low pressure zips up the Saint Lawrence Valley to our north. The track of the low means that we’ll be on its warmer side, so morning snow will gradually change over to rain in the south and sleet in the mountains. Temps […]

Hello everyone! Today will feature clear skies and seasonably cool temperatures as Canadian high pressure slides overhead. Look for high temps ranging from the mid 20s up north to near 40 along the NH Seacoast. Skies look to be mostly sunny as NW flow tapers off and upslope clouds fade accordingly. Enjoy the beautiful late-winter […]

Hello everyone! Today will feature falling temperatures as gusty northwest winds bring colder air into the region from Canada. Whatever temperature you’re at right now will be your high temperature for the day, though mostly sunny skies downwind of the mountains will help stall the cooling trend midday. Current temps range from the upper 20s […]

Hello everyone! Today will feature continued mild weather as another storm approaches from the west. This system will spread clouds into the region from west to east starting midday. Before that, sunshine and SW breezes will push temps well above normal into the mid 30s north and mid/upper 40s south. A few of the usual […]